Scrabbling around on our hands and knees in the basement dungeon we've retrieved a few more Matinée bits and pieces, following the fairly exhausting post not too long ago: they will all appear in this joint once we've fully scrubbed away the cobwebs. Anyway, while dusting off one such review - of Kosmonaut's undersung single - on said label supreme, we finally found a copy of the interview we did with yer man Stephen Maughan, which makes this post something of a Kosmonaut tribute. Rightly. (Since, of course, Stephen has set "This Almighty Pop!" on a revival tip: check it).

the lucksmiths' labelmates kosmonaut are from the north east of england, as under represented in this fanzine as everywhere else, so we can but attempt to redress the balance by observing that following the anthemic firestation tower debut "days of ourlives", the spunky cd-r "in my head" and the welcome resurrection of "was it you ?" on the matinee summer sampler, "desert song" is a serene pop gem which laments how the years flow past with the same inevitability and indecent haste as the sandy landscape flies by the driver's near-side window. subtle and building carefully until the keyboards propel it into a particularly cracking fourth minute, it is probably their strongest outing yet. on the other side "bee song", again careful not to move too fast, sucks the listener in from its opening chords, again with keyboards that seem to slowly emerge, shimmering with longing, and an arrangement which recalls "life goes on"-era bmx bandits (not the first band to do so this month, we know) until it is slightly disfigured by an overbearing guitar line towards the end. like some of that bandits' stuff, the vocals on this two-track 7" occasionally give little hint of being british rather than american, but this is still road music at its finest, and the lingering sentiments of "desert song" in particular hang long in the mind.

"the less said about Sunderland at the moment the better, thank you..."

once upon a time there was a band called bulldozer crash. now there are two bands, called the liberty ship and kosmonaut. find out more about the former here and the latter below, because stephen kosmonaut generously answered our questionnaire about the band whose last release "desert song" was their clearest realisation yet of indie pop with a real "epic" sensibility. to explain our rather odd slant of questioning, we should mention that stephen in a previous incarnation was the author of a proper, readable paper zine called "this almighty pop!" in the days before charlatans like us came along... to check out their discography sensibly or fill in any gaps, it's probably worth checking out their website for the latest - and very excitingly you will read that there appear to be 2 or 3 projects in the pipeline (and an upcoming release of some bulldozer crash tunes...)

if you'll permit us to go deep into history, a few words on "this almighty pop!" - in terms of mixing enthusiasm with erudition (even now so many zines often seem more one or the other) it was certainly an inspiration to what we try and do... was starting the fanzine simply down to being inspired by the music of the time and wanting to evangelise ? and how do you look back on that venture now ?

I just wanted to do my own version of Are You Scared To Get Happy [best fanzine ever - ed.], it really inspired me the most, I used to love getting a new issue falling through the letter box with all those new songs to try and find and listen to. I look back on it with fondness, I made a lot of friends through the fanzine which was probably the best part, the worst part was all the bad records I got sent to review but I could never see the point in writing about songs I didn't like.

for our uninitiated readers, what is the kosmonaut line-up ?

Up until now in the studio it has just been me and Geoff Suggett, sharing all the recording duties, but since we've played live with Richard Patterson on drums, Karl Whitfield on lead guitar and Jonathan Whitfield on bass we would ideally like to exploit their skill and expertise in the studio aswell. So far though only Richard's dulcet tones have been utilised on our cover of the Liberty Ship's "Northern Angel" [slated hopefullly for a soon-ish matinée coverfest].

are you prepared to list your "previous convictions" i.e. former bands and / or other crimes ?

I was in Bulldozer Crash and Denver. My only other crime was stealing a 3 pack of Fox's Glacier Mints from the RedHouse when I was about 10 , I got caught and have lived with the shame of it until now, I feel like a weight has been lifted. Geoff was in the Lavender Faction and Montana Hood.

the 2 of you (stephen and geoff) known each other a long time ? when did you start properly recording / writing songs together ?

We've know each other for about 14- 15 years now, we met at work ... it went something like this... Geoff: What sort of music are you into ? Stephen: You probably won't have heard of them...the Jesus and Mary Chain, the Primitives ? That was it really. We first recorded a song together in about 1990 on an old Fostex X-15 4-track, it was called "She Walks Away", it was very Mary Chain-ish. I released it on a compilation tape I was putting together at the time called "Positively Teenage", we called ourselves Bulldozer Clarts, I'm going to stick it up on our website soon for anyone who might want to hear it. We then got together again in 2000 to have a go at writing and recording some new songs, everything went well and we are still at it.

is there any great significance to the name "kosmonaut" that we should be aware of ?

Not really no, we were going to call ourselves NovaScotia but then we were informed that there was already a band called that in the US, I was using the name Kosmonaut for my electronic side project so we just hi-jacked it. [nb stephen is too modest to mention his electronic side project is now northern_electrix - there is talk of an n_e release in the offing and the cd-r that we managed to get off a dealer in brixton last month isn't bad at all, you know...]

We were quite out of touch with the "scene" at the time that we were ready to send out our first demos, so a friend gave us a list of possible labels and Motorway was at the top of the list, the same friend also told us not to bother with Matinée because we probably weren't polished enough for them! Charming. [Indeed, "Was it you ?" did eventually get a release on Matinée, on the "Summer splash!" cd which you probably need to buy]

next we think came "days of your lives", an anthem which we presume you still must be very proud of. this time the label was german... how did that end up coming out on firestation tower ?

A guy called Christian Steiner loved the Motorway 7" and recommended us to them, we sent them some demos which they liked and offered to stick out a single. Everyone at FST is incredibly patient, they asked us to record an L.P. over a year ago and we still haven't finished it, we will deliver it eventually, honest Uwe!

and you made the decision to put the latest tunes out on the rather esteemed (not least by us as you may have noticed) matinée label. how are people reacting to the new 7" ? is it helping you to reach a wider audience now ?

People seem to be enjoying the single, we've had some really nice reviews. People tell us they like to listen to it in the car. There does seem to be a lot of people signing up to our mailing list since the single came out on Matinée so maybe we are reaching a wider audience than before.

so as you have a full band together now for playing live, does that extend to any future studio projects ?

Yes, but we've only played two gigs so far, if all goes according to plan this will hopefully transfer over into the studio, although I don't know how I'm going to fit a full drum kit in my spare bedroom to record that.

can we assume from the name "porterfield 73" for your studio / cd-r label that you are sunderland fans (if so, here's to a significant upturn in their fortunes for 2003...)

Yes, me and Geoff are both Sunderland fans, the less said about them at the moment the better, thank you.

are there plans to release the likes of "superman", or to follow other more 'experimental' routes further, aswell as the classic pop lineage of the singles releases ?

I really like "Superman" but we are struggling to find anyone else who does! It is in fact just a slowed down loop from Was It You. I'd like to take a trip down that experimental avenue every now and again, but we might have to save that kind of thing for the one off projects that we do like the recent cover version of the Liberty Ship's Northern Angel, which sounds nothing at all like the original.

the ilwttisott take on kosmonaut is a kind of modern road music, full of longing... and with space to "let the music breathe", as they say. if you could had to choose one record to accompany you on a long drive, what would it be ?

At the moment it would be the new Go-Betweens l.p. "Bright Yellow, Bright Orange" or the Russian Futurists "Let's Get Ready To Crumble"...

and what do you think of that band called... the liberty ship ? is there any friendly rivalry in the grand pop tradition ? and who blew who offstage ?

;)Bunch of amateurs. They are not bad actually, some rather nice tunes that I often find breezing through my brain unexpectedly. It was our first gig when we played with them so I guess I have to say they blew us offstage, we really should have spent more time rehearsing.

resolutions and plans for the year ahead ?

Because we've taken so long to answer these questions it might seem a little late but the answer is still the same... to finish the L.P. for Firestation Tower Records.

and before you go, what is your FAVOURITE piece of pop trivia ?

My sister in law 's boyfriend's auntie's stepson used to go out with Zoe from Pop Idol!

thank you to stephen for taking time out to run through kosmonaut's recording career so far... one is hopeful that it is only the beginning. we s'pose that the first album will give us as good an idea as ever as to the directions in which kosmonaut choose to move... and guess what, we'll try and keep you "all" up to date. as for sunderland, let's just hope they can discover some self-respect next season. ILWTTISOTT

And if you want to read a more recent Stephen inter view from a more august source, may we commend this...
at July 01, 2010

The Arms Trade Is Making A Killing: singles of 2019 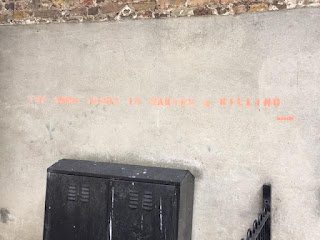